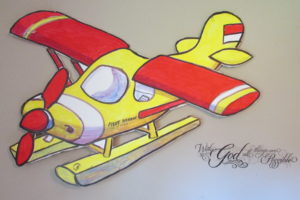 This plane was a VBS prop one year. It given to me and has traveled with me to UT, KY, TN and now back to NJ.

The day we have been waiting for….

On Friday evening, I was presented my private pilot certification after successfully completing both the oral and flight exams.  Let me take you on the day’s journey…

I had originally scheduled the exam for Thursday.  I had planned a mock checkride for the previous day with an instructor to insure that I was, in fact, ready for the test.  That day, the winds were strong, gusting to 28 knots (32mph).  It was fun, but I was fatigued and didn’t perform very well.  After that flight, I sat down with my instructor and the instructor that gave the mock test.  We debriefed and discussed whether or not I should proceed with the actual checkride (flight exams) the next day.  The fact that we were even having this discussion left me deflated. I had thought I was ready.

Looking at the weather for Thursday, I noticed that the winds would be strong – not as strong as Wednesday, but strong enough where I might not want to fly.  So after that, and with the realization that I was exhausted, I decided to cancel the checkride.  The examiner asked if I would like to try for Friday.  At that point, I felt deflated, exhausted and  not sure what to do.  I told him I would like to just hold off.

Thursday came.  I went to work as usual.  I slept well the night before.  My mind was constantly on the checkride.  Should I take it Friday? At this point, even if I felt ready there were no planes available.  I looked at the weather for Friday; the winds were calm and only up to 6 knots which was nearly perfect.  I just kept thinking.  I was torn.  I looked at the schedule. There were glimmers of hope.

On Wednesday, another student, who is a friend of mine, had mentioned that if I needed to cancel her flight so I could use the the plane she had reserved, she would do that for me.  When I got home from work that night at 6:30, I ended up texting the examiner.  I figured, let me just see if he would still be available.  He was.  Long story short, everything came together, and it was set.

Because the airplane was only available in the afternoon, we decided that I could drive to the airport where the examiner was located in the morning and take the oral exam there.  I would then drive back to Trenton, where the airplane was based, and fly back to the examiner and continue the flight portion of the exam.  Needless to say, it was a long day, but I felt 100% okay with that.  I was happy to be doing it.  I felt good.  I had a calmness and peace I did not have before.

The oral exam lasted 2.5 hours.  I did fairly well – well enough to pass!  He extended his arm to shake my hand and congratulated me on passing the oral exam.  At that point, I was so happy.  I knew whatever happened from this point it was a victory for me.  I had gotten further than I had been before.  I knew that if the flight portion didn’t go well that all I would have to do over would be the portions that were not satisfactory. My license was within reach.  I just had to take one step at a time and trust that God would see me through if it was His will.

I drove back to Trenton.  As I was driving the song from Hillsong came on, Not Today.  It is a song of victory!  “Let the devil know, not today.” My mind went to the thought, “what if I actually get my license today?” My eyes started to water.  I instantly thought, “no, I can’t go there.  I need to take it one step at a time.  Whatever God gives me, I will rejoice in that.”  I arrived back in Trenton after stopping home briefly to eat.  I did a preflight inspection and filled the fuel and oil. I had noticed a couple of minor maintenance items that needed to be addressed, so I got those taken care of and was on my way. 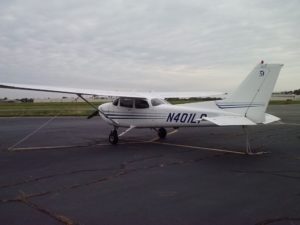 The plane I flew just before I did my preflight inspection.

I flew back to the examiner.  We talked for a bit on the ground and then proceeded to the airplane for the flight portion of the exam.  Throughout the flight, I noticed things that weren’t perfect.  Some things I was just forgetting to do; others I just wasn’t doing that well.  But, I was happy with my decision-making and command of the airplane.  God was allowing me to stay within the required headings and altitude for the most part, which is something I had struggled with a few days prior.

After being tested on flight maneuvers and procedures for at least an hour, we proceeded to make our way back to the airport. I did a couple of takeoffs and landings and then taxied into a parking spot and turned the engine off.  We both took our headsets off, and he asked, “So, how do you think you did?” I knew I wasn’t flawless, but I didn’t want to throw myself under the bus.  What if he thought I did well?  So, I said, “Well, it could have been better.” He responded, “Ah, don’t be so hard on yourself.” He extended his hand for a shake.  “You are the world’s newest private pilot.”  I was shocked and overwhelmed with joy! “I will meet you inside,” he said. It was an incredible moment! I could hardly believe it.  The moment I had been waiting so long for had just happened! Wow!!! 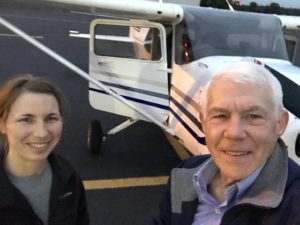 The examiner and I after I became a private pilot!

We sat at the table debriefing for a little while.  We then began chatting and found out that we were both born-again Christians.  It was really encouraging.  He said, “you know this isn’t a coincidence.”  I assured him that I agreed.  He offered to take me to get a slice of pizza since my ride wouldn’t be able to come until 9pm.  It was such a great day! My ride came around 9, and we got back to Trenton around 9:30.  It was a long day, but I would do it again in a heartbeat.

I cannot thank everyone for all the love, prayers, and support over all of these years! It has been a long journey, but not once did anyone say that I couldn’t do it.  People have given donations, said prayers faithfully, and provided encouraging words to help me persevere.  I wouldn’t have wanted to do this without each of you and am very excited to see what the Lord has in store.

The most frequently asked question is, “So, what’s next?”

I am working simultaneously on applying to the FBI and working toward my mechanic certification.  I am also taking the necessary steps to officially becoming a non-profit.  There is a lot on my plate, but it all seems to be going smoothly.

Thank you again for everything! I am happy to share this moment with you.

No Not Today Music Video

I wanted to let you all know that I am participating in a walk to promote awareness of trafficking happening not only in our community but globally.  If you would like to support me financially, I will place a link at this bottom of this blog entry that will lead you to my fundraising page. 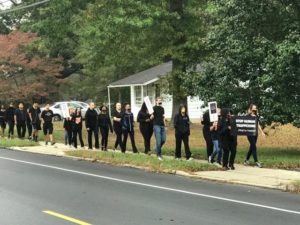 The latest progression on my pilots certificate is that I will be taking a mock checkride on Wednesday.  After that, I will schedule my test for any day to follow.  I am hoping to schedule the checkride as soon as possible.

I am excited for all that God has in store and as always would appreciate your prayers!